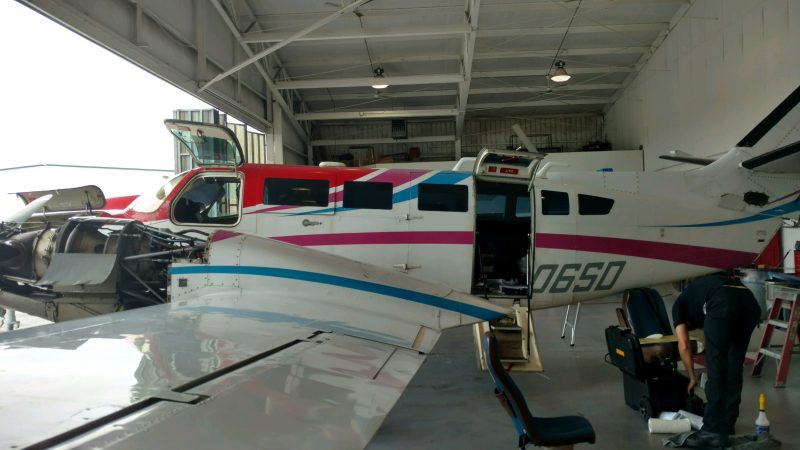 Woolpert is a land surveying company that utilizes and values their equipment, including their airplane. Their company needed to eliminate the glare and heat source that was being caused by sunlight penetrating through the window.

They were struggling with issues that were arising due to the glare and heating causing their expensive equipment to overheat and lose spacial accuracy.

Woolpert approached us needing a same day instillation. We were able to accommodate their time crunch. Prior to finding us, they purchased an adhesive base film system that was inadequate.

Upon further review we were able to steer them in the right direction.

The thing that is so distinctive about airplane windows is that they are not glass: they are acrylic. Therefore, any standard film system will fail and in some cases, damage the windows due to the expanding gasses in the material.

To combat this, we used a static cling film, which is the only material that can be used on acrylic windows. The specific product we used was Gila Static Cling window film 20%. It blocks 99% of UV, and unofficially blocks about 40% of heat.

After we had the correct material the instillation went flawlessly. They were up and flying with the built-in protection for their equipment.

Page load link
error: Content is protected !!
We use cookies to ensure that we give you the best experience on our website. If you continue to use this site we will assume that you are happy with it.AllowDeny
Go to Top